This walkthrough covers how to build with Dropbox Sign Events and Callbacks (aka "webhooks), which are payloads of event metadata automatically sent to your app when something happens in Dropbox Sign.

This resource centers implementation details, examples, and building with webhooks. For a higher-level overview of Dropbox Sign Events, please refer to the Events Overview section of the documentation.

When using the Dropbox Sign API, events can occur in two contexts: at the Account level and at the App level. Events that are scoped to an Account are called Account Callbacks while events scoped to an App are called App Callbacks. We recommend referring to their respective pages for more detailed information.

Enabling Dropbox Sign Events (webhooks) requires two distinct steps: 1. Setting the callback url at the account or app level, which are both covered in the sections directly below. 2. Responding to the event with to verify it was received. 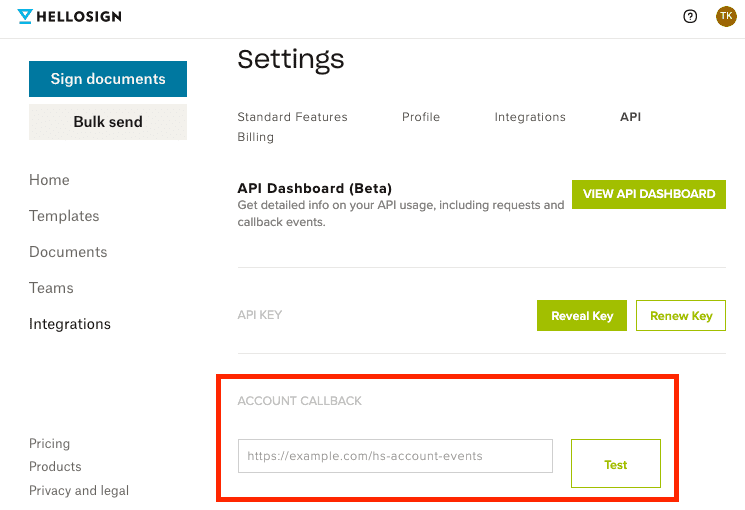 Dropbox Sign sends events to a callback url and expects a specific response in order to verify that events are being sent to a live server. Once an event is sent, the callback url must return an HTTP 200 with a response body that contains the string Hello API Event Received. If no response is received, Dropbox Sign considers that a failed callback and the event will be sent again later.

Too many consecutive failed callbacks will result in Dropbox Sign deactivating webhooks for a callback url. Once deactivated, Dropbox Sign will stop sending events until a new callback url is added. Read more about this behavior in the Failures and Retries section.

Here's a basic example in Nodejs:

When setting the callback url for your app or account in the Dropbox Sign web UI, you can trigger a test event by clicking the test button next to the field. This is a great way to verify that your webhook handler is responding to events successfully.

Once you've setup a callback url, Dropbox Sign sends event data to that URL in the form of POST requests. This section contains information about how those requests are formatted so you can better understand how to interact with the event data.

By default, the POST requests are sent as multipart/form-data with the event details in a field named json.

The Java SDK includes an event parsing class, and you can access this field in the $_POST array on PHP. For other platforms, either a library function, such as cgi.parse_multipart (for python) or ActionDispatch::Http::UploadedFile for Rails, or third party options, such as multer for node, may be useful.

The new Dropbox Sign SDKs (currently in beta) all contain an event callback helper to make it easier to parse event data. This section will be updated when those are released.

Every event payload contains an event_type parameter that provides the name of the specific event that occurred:
Copy
Copied
Generally speaking, checking the event_type is the best approach to filtering for specific events and automating your integration with the Dropbox Sign API. For example, we recommend using signature_request_all_signed as the best indicator that a signature request has been fully completed and can be downloaded using /signature_request/file:
Copy
Copied

You can see a complete list of possible events in the Event Names section of the overview page. This list will be updated as new events are added.

We provide a couple of headers on callback requests to help you identify them.

Every event payload contains an event_hash that can be used to verify the event is coming from Dropbox Sign. By generating your own hash and comparing that against the one sent with the Dropbox Sign event, you can ensure you're only processing events that you know were sent by Dropbox Sign.The mechanism being used here is called HMAC, which stands for "hash-based message authentication code". To generate your own hash, you'll need to use your API key (on your API settings page) as well as the event_type and event_time from the event payload.

If your callback url is not reachable or returns a non-successful response, we will retry POSTing the event up to 6 times, with each retry interval being exponentially longer than the previous one. If the sixth retry fails, we will clear your callback url and you must enter a new one to receive future callback events.

Please note that our requests will timeout after 30 seconds, so callbacks will fail if your server takes longer than that to respond. The retry pattern is described below, an alert email will be sent to you after POSTing has failed several times.